I have been a Lowa fan for several years now. My love affair began with the Lowa Renegades as a staple, multi-purpose all mountain boot.  I spent hundreds of hours in them backpacking, scouting and elk hunting so it was no surprise that the Innox Pro GTX would become my new favorite.

I had a chance to visit Africa on a bow hunting safari and I was excited to see that that the Innox Pro GTX would be a perfect match for the plains terrain of Namibia.  Weighing in at only 2 pounds, the Innox Pro GTX behaves more like a shoe than a boot and allowed me a breathable, nimble option for long desert stalks. Their flexibility and traction also made them perfect for climbing trees when the wind called for a long tree-stand sit.

Originally, the Innox Pro GTX were only available to men and women in the service, which gives you a little insight on the idea behind the athletic and endurance characteristics of the boot. I was able to test the boot in an athletic setting during The Alpha Bowhunting Challenge– a unique bowhunting competition that measures physical fitness and elevated heart rates with shooting skill.  The Innox Pro GTX allowed me to sprint and pull weight on a gravel/dirt surface without slipping and maintain comfort and support in an athletic situation.

A Focus on Women- No one would argue that a woman’s foot is different from a man’s. For this reason, LOWA has been producing outdoor footwear designed particularly with the anatomy of women’s feet in mind from the very beginning. At first glance, you will not notice much of a difference between shoes designed for men and women. But it all changes once you slip on a pair. You immediately feel the many functional details and the sophisticated technology that goes into female footwear.

Sole Design- LOWA has exclusively developed a special PU foam material that meets all cushioning, comfort and durability criteria: LOWA DynaPU®. The special feature: The material is extremely stable. It retains its stability and substance even when it is pressed together 1,000 times. As a result, the finished shoes will maintain their optimal cushioning ability even after you have walked many kilometers in them.

GORE-TEX® Upper Lining- like most of all their other boots, the Innox Pro GTX is completely waterproof.  When looking at the boot, and experiencing the extreme breathability, I did not believe that this boot was waterproof.  The GORE-TEX® upper construction is designed for athletic activities on all sorts of terrain. Thanks to the systematic use of synthetic materials, this upper provides stability and protection to those places where it is needed most. Through the use of textile material, the remaining areas enjoy increased breathability.

Overall, the Innox Pro GTX is a great lightweight hiking boot. Whether you are looking for a quick hard trail hike or plan to carry some weight for multiple days, this boot has got your back….or feet.  The Innox Pro GTX WS hiking boots retail for $240 and are backed by the highest European standards. 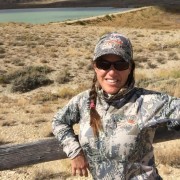 Erin Diegel is a Colorado native and has always been an outdoor enthusiast. She spent the last twenty years sharing her passion for the game of golf as a PGA professional. It wasn’t until 3 years ago that she entered the world of hunting as a desire to learn something new and provide clean, organic meat for her family. She is a team member of Huntress View www.huntessview.com and thrives on sharing her love for the outdoors. You can connect with Erin @eaglediegel on Instagram and Twitter.